Today, I’m coming back to you with one of the only graphic novels I’ve read in my whole life but I’m so happy that I gave it a chance because mamma mia it was worth every second I spend on it. This isn’t going to be a basic review of each book individually because I read them so fast that I can’t remember when one ends and the other starts. But you are going to get some of my messy thoughts, my favourite pages as well as some fan arts. If you haven’t read those books yet, I’d advise you you do and then come back because this will include spoilers. Honestly, they take like a couple of hours to go through and it’s going to be worth your time.

The first volume will give you butterflies. It was the one I loved the least but it was still 4+ pretty solid stars. I guess it’s normal but I would say that it took me a few pages to get into the story at first, and as for the romance, it takes almost the whole book before anything concrete happens. Even though I often prefer the build-up and shy banter and slow realization BEFORE the actual relationship, all of this usually happens during the course of a full book, so here it’s like rating only the first quarter of it. I thought the side characters were well fletched and I adored Tori, Charli’s older sister, and the P.E. teacher. At the end of it, I got so scared that I had to jump to volume 2 right away. 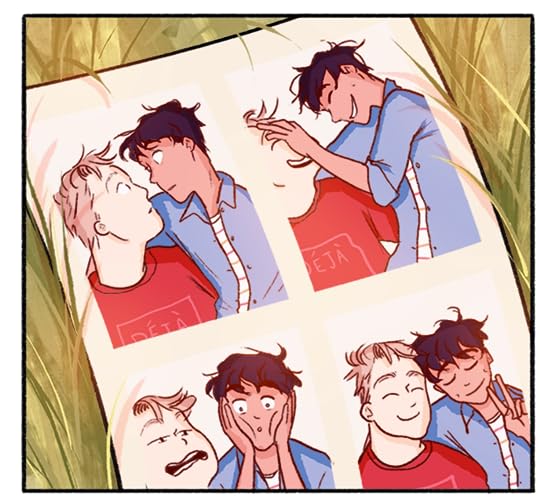 The second volume will make your heart skip many beats (when it will not be melting). The pretending is over, Charli and Nick are slowly settling in this relationship, accepting their mutual feelings. They are still keeping their relationship hidden from other people at school but they are not ignoring each other. Nick is figuring out that he might be bisexual but doesn’t feel rushed to choose a label. Charli is openly gay and he came out before the first volume, but he is comfortable with Nick being attracted to both genders and he gives him time and space to figure himself out. Their scenes were so pure and they truly are the cutest human being ever. I literally have nothing bad to say about this volume, it was perfection. Tao kind of bothered me a tad, but this volume was so awesome that I managed to ignore him.

The end of Volume 2 and volume 3 are marked by the acceptance that their relationship is not something to be ashamed of and that they don’t need to hide it. Both of them start to talk about it more, opening up to people they love and trust. It was precious to read about and it warmed my heart to see them pouring their heart out and being received with love and openmindedness. This part was really well executed and gradual, therefore so believable. First saying it out loud outside, then to parents, then to friends, then being one hundred per cent open about it. 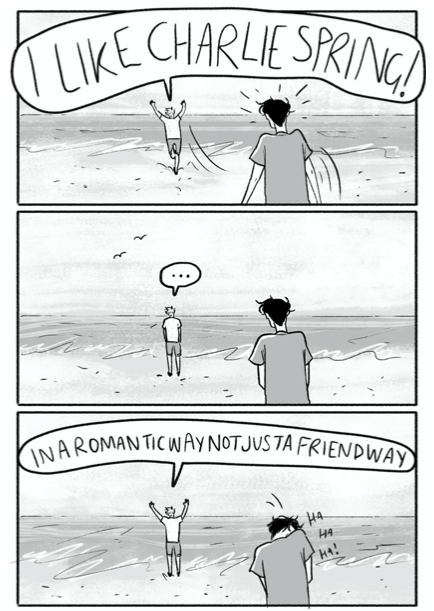 The family portrayal of this book was so accurate, and almost exclusively supportive and we all stan that. Of course, there still were many cute scenes but it was more focused on the exposing of the relationship. Also, this book mostly sets in France and reading Nick speaking French was so freaking adorable. 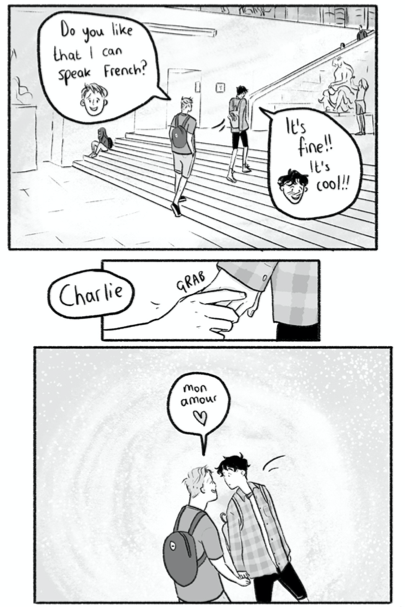 The friendship dynamic was really great and beautifully done. Throughout the books, we learned that the P.E teacher is married to a woman, that Nick ex-girlfriend is in a sapphic relationship, and that Elle is trans (amazing diversity, right?). I warmed up to Tao because I ship him and Elle so bad. I’m just so excited for the fourth (and fifth!!) volume, that comes out in February 2021. It seems so far away, but the ending wasn’t a cliffhanger so I can survive until then. I really hope we’ll see more of Charli’s sister because I’m so curious about her.

Have you read those books? What did you think about them?
What have you been reading lately?