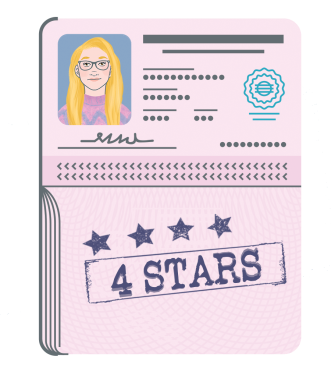 “Love doesn’t always have to be about the happy ending. Love can be about beginnings, too.”

Even though it has been on my TBR for more than two years, The Afterlife of Holly Chase was not a book I was intending to prioritize and reading it so soon, at least until Emmmabooks tweeted about it that it was the perfect Christmas read. I know I should have already been aware of the fact that this book was set on Christmas since it’s written on the first sentence of the synopsis, but to be honest I didn’t remember this fact. Throughout this winter I have been very committed to my challenge of mostly reading seasonal books and all of a sudden, this one seemed perfect to close the month of December. Also, you know how much I trust Emma’s opinion, so if she recommended this book, I had to read it. And I’m happy I gave this book a chance.

The Afterlife of Holly Chase revolves around the story of ‘A Christmas Carol’ by Charles Dickens that I read on Christmas two years ago. Unfortunately, I can’t remember most of this book, and since I hadn’t considered useful to review it back then, I was doomed to dive into this new story with vague and inaccurate memories of it. Obviously, this book is the story of Holly Chase, a filthy rich seventeen years old Californian who was visited on Christmas Eve by the three ghosts of Christmas. They tried to make realize how selfish and mean she truly was, in the hope that she would change her ways and become a better person. But Holly, sceptical, believed that it was probably a joke or that maybe she was dreaming and resumed her life staying the same. And she was killed, hit by a car, the following week.

She has now been stuck working for Project Scrooge for the last five years, impersonating the Ghost of Christmas Past. Every year they try to save an old privileged, greedy and selfish Scrooge and they always succeed; it seems like Holly was one of the only failures this company ever had. As long as she works there and stays in New York where the Headquarters of the secret company are, she remains a human-like ghost, her body frozen and resetting every day. When they decide to dismiss her, she will experience her final death and be gone forever. Unable to see her dad and living with limited funds, Holly is miserable, but it could be worse; she could be dead. Only this year, everything is different, because this very grouch is a teenager. Ethan is just like she was, a boy who only seems lost and sad, who seems so different from other subjects. Holly decides  to investigate his case a little further.

I’m honestly surprised how much I liked this book, considering that I don’t remember liking A Christmas Carol a lot and that overall, I’m not really what could be considered a Christmas person (last year I spent in front of the TV with my boyfriend eating take out Japanese). The book is really short and the characters are easy to connect with and I enjoyed reading about them, even the unlikable Holly. I liked how her character grew, throughout the story. I liked the additional characters as well, how at first they annoyed her and then started to create real friendships with them. Soon, a romance develops between Ethan and Holly, that was predictable, however, I’m surprised by the ending chosen by the author that I didn’t fully see coming.

“It’s never too late to become what one could have been.”

Concerning the romance, it was very gripping. Holly’s narration allowed us to witness how lonely she truly was (when she is dead, but also when she was alive). I really liked reading about (now twenty-two years old) Holly hiding and sneaking out to meet her ‘boyfriend’ in real life. I loved the moment when she tried to ‘randomly’ meet him it made me laugh so much. And the fact that she got to sifts through his memories at night allowed her (and us) to see his vision of their encounters, and I liked having both points of views of the same event. However, the fact that Ethan was a minor and therefore five years younger than Holly kind of bugged me and I honestly would have preferred this book if we didn’t get the ‘love conquers all’ trope.

Overall this book is the perfect Christmas book, I would definitely recommend it.