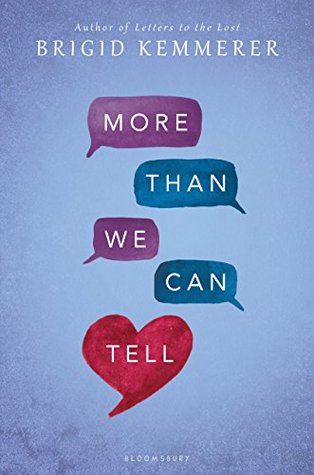 “We all push sometimes, just to make sure someone is on the other side, pushing back.”

*Groan like a 13 yo* ughhhh, More Than We Can Tell made me feel so frustrated. In the last year, I’ve read several Brigid Kemmerer’s books, including Letters to the Lost, this book’s prequel, and EVERY. SINGLE. ONE. OF. THEM made it to my favourites. Not only I’m utterly in love with the writing, and the stories, I’m falling for each of the characters, they are fleshed out, insecure, lovable, with their own strengths and vulnerabilities. I already had my eyes on Rev Fletcher, one of the side characters in Letters to the Lost, and as soon as I knew that More Than We Can Tell would focus on him as one of its main characters, I was sold. I was eager to read one more time about Rev, his scars, his hoodies, his dark past and his unconditional friendship. Also, I knew there would probably be some glimpses of Declan and Juliet, which only made my excitement gone up. And I was a thousand miles away to think that so much could go wrong.

Rev’s quiet life changes when he receives a letter from his biological father, a man he hasn’t heard of for ten years. Now that he turned eighteen the man who abused him physically and psychologically for years is allowed by law to reach out to him and he does. Reading the letter brings back all the demons Rev has been keeping at bay for years. He intends to ask for help from his adoptive parents but they just started fostering a new child in need and it’s not the time to bother them with it. So, gentle and good Rev starts withdrawing into himself, keeping at bay everyone, including Declan. He seeks answers in the Bible. One day, hiding behind the church, he meets Emma Blue, who is walking her dog, and she has her own lot of problems.

“I haven’t seen him in ten years, and one little note has me craving his approval.”

Emma, aka my biggest issue with this book and one of the most obnoxious main character ever written. She is a gamer, a programming genius, coded her own computer game from scratch and she is a whiny, selfish ass to every person she speaks to. I know I mostly read YA even though I’m almost twice the age of the MC, and I know that most of the characters I read about don’t seem to have the age they say they have, but Emma brought childish to a whole new level. I’ll give you some context, Emma is being harassed and bullied online by a troll, and I agree that’s a very stressful and dangerous situation, however, instead of reaching out to a loved one, she sends everyone packing. She is mean to her best friend because she has a fickle hobby of posting make-up tutorials on Youtube. She is mean to her mother, who actually cares for her because she has a conflicted relationship with her idealized father, and of course, as the immature person she is, Emma takes side with her father (without knowing anything about their fights to begin with).

Emma is also mean to Rev, and I think it was meant as a way to keep the romantical tension going but, the thing is there is no tension whatsoever between them. Their meeting was weird -but a good kind of weird- but the rest of their interactions felt so unnatural and forced it actually made me cringe. I did believe that sometimes it’s easier to talk about your problems to a stranger, so that he/she couldn’t judge you, but they both know they are going to the same school, and I for the life of me, no teenager in their right mind would tell someone from the same school intimate secrets on the first time they talk. I admit some parts were cute, like the back to back texting holding hands, but most of it was just plain awkward. Therefore, the drama resulting from the fights -see, I’m nice, I’m calling Emma being an ass and Rev apologizing without knowing why ‘a fight’- felt unnecessary and once again cringe-worthy.

“Would it be weird if I asked if you wanted to do this again?”
“You mean, meet behind the church to freak out together?”

Even though I adore Rev with all my heart, sometimes, it was hard for me to connect with his narrative. The thing is that I’m an agnostic, and I had some difficulties relating to all those quotes from the Bible and to the abundant references to the religion. But I can see that when you believe, it becomes an important part of your life. However, I am not able to understand why Rev is still a believer after all he’s been through, especially in the name of God. I know that the author tried to explain the reasons multiple times, and also that Rev has PTSD so he is sometimes not able to think rationally to certain things, but it’s still not clear to me. Also, his storyline was so heavy compared to Emma’s that it made her ‘problems’ seem even more insignificant, making me struggle even more to feel pity for her (we all have tough times, and thankfully every time someone’s feeling down they’re not as cruel as she was). The last thing I had a huge issue with was the unnecessary love triangle.

But there were still things I adored about this book. The parents felt real and well represented, I loved Rev’s adoptive family, they were so caring and loving. I wish every kid in the system will end up in that family. The new foster brother with his own horrible backstory, Matthew was a great addition and I really hope he’ll have his own book later. I really liked how realistic Emma’s harassment was pictured, especially related to the fact that she is a woman in the gaming community. Last but not least, Declan was the perfect best friend, and I love him even more now. He was kind, understanding and patient and he gave Rev excellent advice without pushing him too hard and he always found the good word to appease his friend.

“Get your gloves. If you need to throw punches, let’s find something better than my face.”

“You’re neither son, Rev. If you’re anyone, you’re the man who watched his kids act like total dicks, only to stand there with open arms and forgive them.”