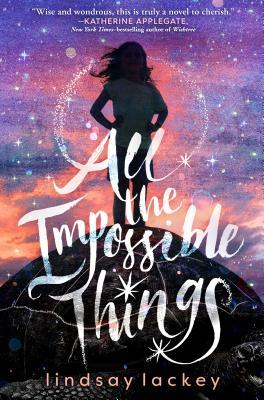 “When darkness closes in, though, the stars shine brightest.”

I received an ARC of All the Impossible Things at BookExpo, this in no way impacts my review. However, my review is based on an unfinished and uncorrected copy, please note that the story and quotes may differ from the final book.

Ruby “Red” Byrd is eleven-year-old and yet at her young age, she has already dealt with more than most adults. Born to a teenage single mother who developed an addiction to prescription pills, she was raised by her grandmother Gamma for the few first years of her life. Gamma is a sunshine ray of hope and smiles, she teaches Red that things often look impossible until they are made, for instance, ‘going to the moon’ seemed fantasy until someone went. Together they keep a diary with all those not-so-impossible actions, and it gives Red hope every time she thinks she is not capable of something. This is when Gamma is diagnosed with cancer and then dies after months of treatments.

“Knowing the difference between hard and impossible is important. Lots of things in life are hard. But nothing is impossible.”

Red returns with her mother for a while, but she soon starts spiralling and is arrested for drug possession and is sent to prison. Without any family member left to take care of her, she has spent the last three years in the foster care system, moving from family to family, from school to school, and it hasn’t always been pretty. Her caseworker is trying to do her best to find Red the best-suited family, but every time things go wrong. Red knows that the lack of stability is because of from her wind, a gift she inherited from her mother. Whenever her emotions get wild, especially when she feels threatened or angry it impacts the wind, which starts blowing. The stronger the emotion, the stronger the tempest. Red has no restrained over her wind and she tries her best to contain it within herself, she knows that she will have to learn to control it before someone gets hurt.

Being bounced from house to house had made Red cynical, she stopped opening up to the families, keeping a safe emotional distance and desperately waiting for her mother to get out of jail, and when her latest placement didn’t work out, Red is placed to a new foster home with Celine and Jackson Groove, a retired couple and their many dogs, who run a petting zoo with rescued animals including a dancing donkey, a 400-lb tortoise. Celine and Jackson are extremely patient, they also have their own problems, but they always respect Red, her complicated story and her decisions, giving her all the space and time she needs to settle down. Where other foster parents would have urged her and demanded to know what was her deal, the Grooves recognised small victories without pushing. The trust they gave her was primordial.

I love how Red slowly healed thanks to the rescued animals. Taking care of another living being that had been through a lot was really therapeutic, like a mirror of her situation. The unfailing loyalty of Gandalf the dog, the tenderness of a goat or the love of Tuck the giant turtle were perfectly written and never failed to amaze me. Red connected with Tuck instantaneously after learning how his shell was injured, and she vowed to protect him. I also adore the friendship she wovens with her neighbour Marvin whose family is Hawaiian. Marvin has such positive energy, he is always cheerful and helpful, I loved how he wanted to share his culture by bringing Hawaiian food to school or trying to start a Hawaiian cooking show online.

Red is growing comfortable in her new situation, surrounded by unconditional love, when she finds out that her mother has actually been out of prison for months now and that she hasn’t reached out. As soon as she is allowed to visit her, her delight is tempered by her mother’s usual careless behaviour. As her mother’s custody hearing approaches, Red asks Marvin for help to make a video to convince the judge that she has to be placed back in her mother’s care. But, as we learned, things never go as planned.

“Grief isn’t like anger. Anger can burn out. It can be released. But grief is something that becomes a part of you. And you either grow comfortable with it and learn to live your life in a new way, or you get stuck in it, and it destroys you.”

All the Impossible Things is honestly one of the best middle-grade I’ve ever read, the writing is beautiful and the story is the perfect balance between happy and sad, both heart-breaking and heart-warming at the same time. I often reproach to books that they are telling instead of showing, but here I feel all the emotions with all my heart. I was a bit confused with the use of the wind power Red had, it’s always weird to have magic included in a totally normal world, and after many debating I think that the wind is actually a metaphor of her feelings, the more she feels desperate, the more she has this uncontrollable feeling deep inside her. Overall, this book shows the utmost importance of a loving family that needs to surround a growing child and that family is not necessarily where you are born but it is actually where you find it, the one that makes you feel like you belong.