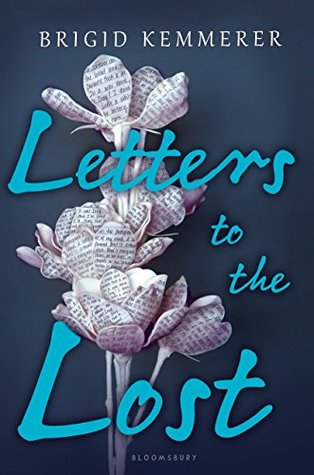 “Grief isn’t a competition. Or at least it shouldn’t be.”

The first book of my ’10 books in 3 weeks’ project

My Rating: 5 of 5 stars
Juliet Young still writes letters to her mother. Her mother was a photojournalist in war zones, often being away from home for long periods, and Juliet took that habit, telling her all that happened to her life, but a few months back, on her way back home, her mother died in a hit-and-run car crash. Overwhelmed by grief, those letters became the only thing helping Juliet staying sane, what made the absence more bearable and somehow keeping some sort of normality in Juliet’s life. She regularly comes to her mother’s grave, speak with her and leave her letters there. And one day, she found that someone had written back to her.

Declan Murphy is the quintessential bad boy. Or at least that’s what he wants everyone to believe. He is also trying to cope with a personal tragedy; the death of his younger sister and his father being in jail for which he blames himself. His life has turned upside down and he doesn’t seem to find his place at home with his mother and stepfather. After a bad decision he made, Declan has ninety hours of community service, which includes mowing at the local cemetery. There he finds a letter and his curiosity wins. When he reads it, he feels so connected to the writer’s agony and decides to write back two simple words, two words that would change his life; ‘me too’.

“What you wrote implies that you understand agony. I don’t think you do. If you did, you wouldn’t have interfered with mine.”

At first, Juliet gets upset that someone took the liberty to read her most personal and raw thoughts, invading her privacy and she decides to write a letter telling exactly what she thought of such behaviour. However, she soon realized that she shares a lot more than she was thinking with that person. Juliet and Declan start writing back and forth, sharing about life, connecting on their pain. The fact that they were unaware of the identity of the other made them open up more easily and with genuine honesty. They became virtual friends, helping themselves at they helped each other. But what they couldn’t have guessed is that they actually know and dislike each other because of prejudices and misjudgements.

I’m so happy to say that once again Brigid Kemmerer managed to touch my heart. I’m a sucker for epistolary romances and for enemies-to-lovers tropes and this book had both and it was a first for me. We can actually feel the slow-burn tension growing between the two characters, both on their written correspondences and physical interactions, and the despair while waiting for an answer was palpable. To me, the presence of adults was also vital to make this book a success, and Brigid once again was on spot. I often reproach the lack of adult figures in YA and this time we had a kaleidoscope of representation. From neglecting mom to the concerned dad, from the benevolent neighbours’ parents to the attentive community service supervisor, some of them positive role models, some others having a negative impact but all essential nonetheless.

“Am I stronger than you thought I was?”
“You’re exactly as strong as I thought you were.”

Now I need to address the friendships. Yes, Declan and Juliet became friends, but they also both have a best friend. Rowan and Rev were so supportive, protective and always seeking what’s best for their friend. They both had their own issues and yet still managed to be fantastic friends. I liked how that even though this book is marketed as a romance, and yes, it was an important part of the story, the character development remained the priority and it gave us amazingly real and deep characters. I have to say that I have my eyes on Rev and I can’t wait to read More Than We Can Tell since I know he is one of the main characters there (TBH I’m usually more into the quiet outcast cutie in a hoodie than into the flirtatious bad boy).

To conclude that –long– review, Letters to the Lost is a stunning story about labels and misjudgements, profound grief, the utmost importance of friendship and eventually moving on. Also, it was a gift from my awesome co-workers and I’m so grateful to have been allowed to read this masterpiece.