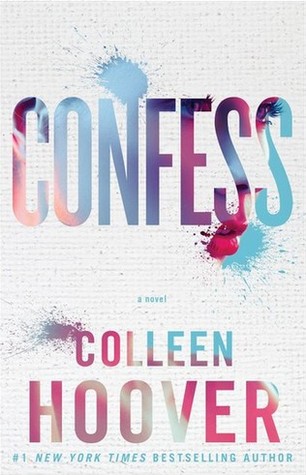 “I’m scared I’ll never feel this again with anyone else,” I whisper.
He squeezes my hands. “I’m scared you will.”

Auburn just moved to Texas and she is desperately looking for a second job because her current position as a hairdresser doesn’t cover her coming expenses. She is hired by Owen to work as an assistant in his art studio to help him selling his paintings and he offers her a pretty sum of money to do so. At first hesitant, Auburn finally accepts. From there starts a very special relationship between the two characters, forged on their difficult and mysterious past and mistakes.

The particularity of Owen’s work revolves around the name of its studio: “Confess”, indeed random people when walking by the studio can anonymously post confessions about anything that goes through their mind (their past life or their current thoughts) and those confessions then serve as inspirations for Owen’s paintings. And I have to say that I absolutely loved that idea, it gave the paintings a deeper meaning and knowing that those Confessions, however dark and depressing, were actually real, and it gave even more depth to the concept. And the pictures in the book that accompanied the confessions were so well thought out, and mature, they really spoke to me.

Here’s the thing about Confess, it had nothing new or different, it was what we can call basic NA contemporary book and yet I devoured it in a few hours. I think this is Colleen’s superpower, because every single one of her books, I swear, she manages to hook me over and over again, without writing anything more than a sweet (sometimes basic) romantic story. But I guess that’s how you can see that an author is talented and that he/she put all of him/herself in her/his books.

One of the things I like the most about CoHo is how she makes me care for her characters. I didn’t love Auburn because to me she didn’t add much to the story, she was mostly the nice, little-miss-perfection that she was expected to be (even though I didn’t see her ‘secret’ coming and I gave her a believable back-story). She really seemed so sad and lonely. But please, let’s talk about Owen Mason Gentry *alias OMG* it was so refreshing because he was very different from the love interests I usually read about. He had kind of a hipster vibe, he had some quirky and nerdy reactions while being always optimistic and that was really so precious.

Though I found Auburn kind of bland, she has a badass roommate: Emory. And I adored her so much, too bad she wasn’t more present, she really needs her own book (Colleen Hoover, if you can read me!). I loved how she didn’t have any social cues, always eavesdropping and giving her opinion even when she isn’t asked to. I can’t tell more about her because that would be spoilers but just for her, the book deserves a go.

There are few scenes I would have liked to be more explained though, for instance, I would have liked the reasons why Trey’s mother was acting the way she did, I wanted Auburn to confront her and her to explain. I would have appreciated that the conversation between Auburn and Owen’s father wouldn’t be so skimmed, to see how she managed to let him see reason. And also, even though it was well thought, I didn’t like what was the explanation for Owen’s behaviour around Auburn since they met at the beginning of the book. He was too protective for the reason given, to my opinion.

Now I really want to speak about the first chapter of this book. Never have I felt so much in so few pages. It actually intertwines with my personal history, the way pain and loss were explained, it ached deep inside me and it made me feel overwhelmed. Fate can be so cruel and brutal and this story had that part true. The fact that they both had a second chance at happiness is making me so hopeful. I’ll stop here otherwise I’ll be a mess once more.

The TV show: was very enjoyable, it had many differences with the book itself, but I really like the actors.