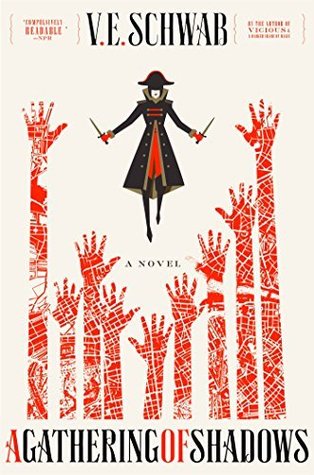 “Everyone’s immortal until they’re not.”

I’m speechless. Even with the synopsis, this book sounded promising as I really loved the idea of the Essen Tasch – the Element Games, an international magic tournament – but it even managed to surpass my expectations. It simply had it all; badass magic, a deceptive captain, a golden-hearted Antari, a reckless thief, a multi-layered prince, and a mysterious and dark king, all this mixed with a phenomenal and so imaginative world-building. With this second book, the author also decided to focus on the characters and their complex layers, on their relationships as well as on their personalities. In the end, I really enjoyed that Lila and Kell were apart for most of the book because we witnessed them as a person, as who they were and who they are becoming without each other.

I loved the diplomatic edge V.E Schwab gave to this book, the political side helped a lot in the world-building development following in the path of the first installment. I can see now how the world-building is supposed to be a painting, where every new sentence is a new shadow or detail of it. The tournament was a perfectly good example, as the participants were matched according to their abilities to make a fair and entertaining show. It wasn’t about killing one another, but about showing off magical strength. And even the slower parts had a utility in this greater frame.

Indeed, I would say that the main action started around two-third of the book, but it didn’t bother me as I acknowledge that the beginning was useful to the story. Moreover, even without the main action, most scenes stayed badass and action-packed. That first scene when Lila takes over a boat by herself is pure madness. In this book, Lila totally overshadow Kell and everyone else, she is the queen, always sassy and independent (no prince charming here) and seeking for more adventure with her numerous knives.

“I am Delilah Bard, she thought. Pirate, thief, magician.
I have crossed worlds and taken ships. Fought queens and saved cities.
I am one of a kind.”

However, I think she made some very questionable choices throughout the book. I get that she is supposed to have locked her heart and to think that emotions are liabilities, but there, she walked on the fine line between being badass and reckless (even dangerous sometimes). She made some actions just because she could, some other just for the thrill of it. Because in the end, why did she want to be part of the Essen Tasch in the first place? What did she have to prove? Some of her decisions even seemed like tantrums, and some of her actions were too cruel for me to sympathize with her. 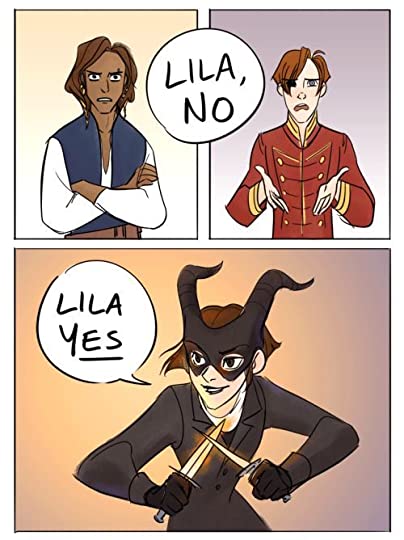 My frowning Kell was a mess in this installment. A character broken from both by the physical and psychological consequences of being bound to Rhy and by the fact that he missed Lila. He has been pushed away and blamed for the Black Night by everyone (the King and Queen included) making him feel even more trapped and caged than he used to. He was lonely and he didn’t know what more he could do to satisfy them, to regain his place, and to belong. The only rock he had was Rhy. The fact that he didn’t have Lila in the first part really helped to develop their brotherly relationship and it was so enjoyable.

We all know that Kell would give his life for Rhy, but in this book, we also saw that Rhy would do the same. He blamed himself and also had his demons to fight while keeping up appearances of the flirty and smart-mouthed prince he used to be. He was aware of his brother’s suffering and really tried his best to make him feel better. I loved their bromance and I grew warmer around Rhy as a character, even laughing on certain of his sentences. His “childishness” became endearing.

“Over the next five days and nights”, continued Rhy, “these thirty-six magicians will compete for the title and the crown.” He touched his head. “You can’t have this one”, he added with a wink, “it’s mine.”.

This book brought us a new and very interesting character in Alucard the pirate privateer, captain of the ship where Lila ended up. A skilled magician, cocky, and yet very smart and wise. He added a lot to the story and quickly won me. I loved how mysterious he was and how we slowly learned small parts of his history, his weaknesses as well as his strengths. I shipped Rhy and him so much as a couple, it was so unexpected and so hot. Their kiss gave me butterflies in my stomach. Actually, I should have seen that coming as they have similar personalities and they fit so well together. Their relationship strengthens both their characters and gave in some way lightness to the story.

“You’re still mad at me,” Alucard said.
Lila straightened. “You tried to seduce me, for information.”
“You can’t hold that against me forever.”
“It was last night.”
“Well, I was running out of options, and I figured it was worth a shot.”
Lila rolled her eyes. “You really know how to make a girl feel special.”
“I thought I was in trouble precisely for making you feel special.”

I loved how V.E. Schwab introduced LGBT characters in this book, how smoothly it was done. Without labels and without prejudices. Really, real-life should take an example on this. I really can’t wait to read more about this side of the story; are all characters bisexual or is mostly heterosexual with a great acceptance toward other orientations? Is bisexuality indeed well accepted or is it just that those who know of that relationship are just okay with it? I’m really interested and I hope we know more about it (maybe a public wedding!?) 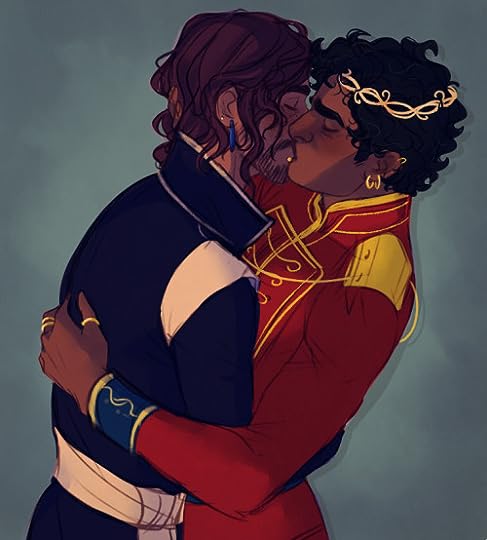 I really loved the writing, the plot was fantastic and it stayed unpredictable (the more I read, the rarer it becomes). I loved that the magic is considered as a character, as a living being. Those who live in Red London even believe that magic is one’s soul and that once you die; it survives independently of the one who wielded it. Magic is not granted, it requires to be handled with both a firm and tender hand, it has the need to be considered as an equal and it comes with a price. And that I loved deeply. One of my favorite parts was the religious debate between King George of Grey London and Kell, I loved how Kell pictured Magic as their god and how it chocked the King and his beliefs.

5 thoughts on “{ Review } A Gathering of Shadows by V.E. Schwab”