“The difficulty is not so great to die for a friend, as to find a friend worth dying for”

It is so hard for me to rate and review this book. But hell, I’ve waited too long, I need to do this otherwise I’ll never be able to move on. I liked this book a little bit less than the first one plotwise, but it made me feel so much more. I feel so empty and full at the same time, it is really unsettling (and probably this feeling is amplified with the two years of longing that are coming for me). Lord of Shadows starts right after Lady Midnight, with Emma and Mark pretending to date and be in love –emphasize on the word pretending– and with Julian trying to cope with their relationship. I’ll keep saying that The Dark Artifices stays Cassandra Clare’s best and deepest work because it is. She even managed to make some characters I hated in other series more likable.

I’m in love with Julian like I’ve never been in love before, I love the fact that he is slowly sliding in a darker shade of himself, how the decisions he makes are getting more and more morally grey; he is the better written morally grey character I’ve ever read about. He is not cute; he is scary and ready to do whatever it takes for his family no matter the repercussions. His love for Emma and his sibling is larger than anything, larger than life itself. He has sacrificed so much and is ready to lose everything, including his sanity, for them. I like how they are all aware of that, and how they try to make him understand that he is more than enough for them, how thankful they are.

“There’s nobody else I’d rather be like than you” she said. “I want you to be proud of me”

Emma is the strong lead female character I love to read about, she is devoted and badass. When I adore a male character as much as I adore Julian, I often find hard to find a female worthy of him, but they are so perfect for each other that I have to concede. She complements the good sides of Julian, but also gradually tries to protect him against his dark thoughts. I also love the role she has taken in the Blackthorn family and her friendship with Cristina is pure gold.

As I knew I would be, I was really heartbroken to read about Jemma being apart and awkward around each other for the first time in their parabatai life. The way they misunderstood where the other’s affection lied, it was so much for me to handle. That scene when they hugged making the rune to burn the church, that was so bittersweet, it broke my soul. I really don’t know how Cassandra is going to do with the next instalment (with Robert Lightwood, literally their only option, being dead) but whatever she has two years to figure that out (yes I’m mad!) They just are one of my favorite OTP ever and I need them to be happy at last.

“I tried so hard […] to make you not love me,” she said. “I tried.” She felt him recoil, not so much outwardly as inwardly, as if his soul had flinched. “Is it that awful? Having me love you?”

I loved the two trio C.C. introduced us to, the Mark-Cristina-Kieran dynamic was really talking to me, and I have to say that even though I loved Cristina in the first book, I wasn’t a fan of Mark nor Kieran, and they both managed to grow on me in this installment –especially Mark with his attempts to pretend to be in a relationship with Emma, and the Magnus fish thing, hilarious–. I don’t know why I feel like either one of them is going to die, or that they are going to have some kind of a three-person-relationship.

The Kit-Ty-Livvy trio was just perfection. I loved their complementarity and Ty is one of my favorite side characters ever. I’m in awe with how Clare introduces his complexity as well as his autism. He has a fierce and caring side that I just want to hug, and the way Kit is the first to word his condition, and how this situation emphasizes the way the Clave is harmful to those who are different. The scene when he puts his headphone on and run to free the fairies is one of my favorite so far. Kit is a great character as well, his POV was so refreshing as he is the first character we got to read about that wasn’t in owe for the Shadowhunters and wasn’t thrilled to join them. I ship Kit and Ty so so much and the evolution of their relationship was handled so perfectly, slowly and gradually. 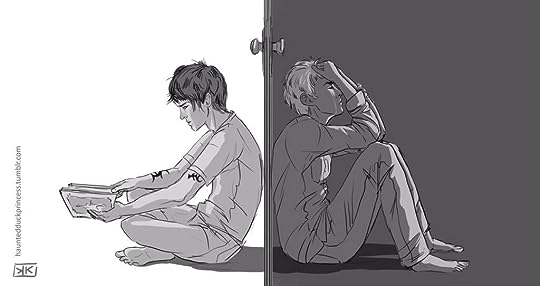 – I enjoyed Diana backstory; basically, I liked how most of the characters are part of the LGBTQ community. I enjoyed her relationship with Gwyn and I need more about them.

– I NEED to talk about Dru. I didn’t like her during this book, but the way she thinks about food, how she has to be cautious, and how people might think when they see her eat was so hard for me to read. Here is the quote for those who don’t remember it correctly:

“Dru had long ago learned not to eat much in front of people she didn’t know, or seem as if she was hungry, or put too much food on her plate. She hated the way they looked at her if she did as if to say oh, that’s why she’s not thin”

And that was me. I lived with those words carved in my mind every time I ate outside, in public, I told myself that people were thinking that because I was eating, I shouldn’t be surprised that I wasn’t thin. I lived with that during all my teenage years and now that I’m done battling with an eating disorder it feels so good to see that I wasn’t the only one. And just for that tiny sentence, Cassandra won me over, as her word were so true as if she had heard them from my mind.

– Now Livvy’s death is not something I can go over right now. I was almost sure that if one of the Blackthorn would die, it would be Dru, due to her behavior during this book. But god Livvy. I can’t bear it. Because her death hurt the most of my two favorite characters of this series, being Ty and Julian, but also because I could have seen her and Ty and Kit having their own series. I know that Kit will help Ty to recover, but life will never be the same for him. He will always regret that they didn’t become parabatai the loss of a sibling, the loss of a twin, is something you can’t easily come back from, and it will change him forever. Also, I’m kind of frustrated, why Emma and Julian didn’t try that superpowerful healing rune to save her? WHY?

Edit:
You can find the extended NSFW version of the cottage scene with Julian POV here!! (thanks Pauline for the link) ENJOY ❤

2 thoughts on “{ Review } Lord of Shadows by Cassandra Clare”