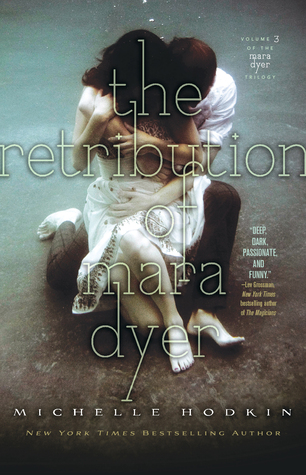 Overall, I liked each book a little less than the previous one. And that’s a shame because this trilogy had the potential to be amazing with the heroine on the verge of going either crazy or becoming kind of revengeful dark anti-hero, but actually, none of those things happened. I’m really disappointed because every time, I wanted something to happen and it didn’t, I was like “it’s okay, something good can still happen” and in the end it never did. Below under the spoiler tag, you can find all my thoughts and disappointments through the books:

Yes, Ladies and Gentlemen, this book was sold to me as paranormal; it was actually more romance than anything else. I was so hopeful things would get better, but in the end, the story was far-fetched with too many “how convenient” parts and many loose-ends and inconsistencies such as the fact that if the powers were genetically obtained, how the death of original carrier influences the manifestation of the gene in his descendent? It really makes no sense… And how Mara starts torturing and killing off people –and really seem like she is enjoying it– but others didn’t really seem to care, pretending like it didn’t happen. Really who does that?

“I would rather have today with you than forever with anyone else.”

I really felt like Noah’s suicidal and self-harm tendencies were romanticized, like only his love for Mara could cure him. No. Please. Give this kid actual professional help. Give him a healthy recovery. Don’t stick him in this destructive relationship that might ruin him. I love Noah’s character, he was so precious, and I might even like Mara, but not together, they deserved an ending, actually any ending, where they would have parted way. But as they say, the road to hell is paved with good intentions. Perhaps.

There were still things I liked about this book, such as the writing style which was enjoyable even though the plot wasn’t that good. I liked Jamie and Daniel as characters (but not really how they forgave everything Mara did) and I appreciated Stella and Mara’s friendship, probably because it was the only significant relationship Mara had with another female character (and still, she left too soon, like “we don’t care about you” I tired of that woman on woman hate, really). However, those characters weren’t enough developed, I wanted more about them, about their struggles and their past, and their likes and dislikes…

“Do not find peace. Find passion.”

My biggest regret was that the characters were not white, nor black, nor grey. There were no heroes, no villains. And that felt kind of not enough for me. Even if the end was full of unanswered questions, the alternative POV of Mara and Noah having sex, it was really sweet that we had to be able to read from both their point of view, it made this moment more romantic and reading about it that way completed the experience. Also, I really smiled mischievously at those last couple lines, it was not what I expected but it still was wicked.