“No Mourners. No Funerals.”

What convinced me of reading this book:

“Though he’d trusted her with his life countless times,
it felt much more frightening to trust her with his shame”

«Which Six of Crows character are you?» take the quiz right here! I got Nina, it works perfectly fine for me!! Tell me who you got in the comment! 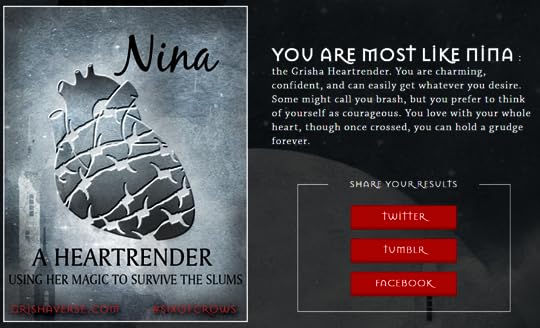 This book was pure genius!! MY DEAR GOODNESS! I usually don’t like third-person narrative books and I’m not keen on multiple POV and yet this book uses both. And it was a masterpiece.

I cried, I laughed – A LOT -, I felt pain and love and forgiveness.

The story takes place in the Grisha world (which is preferable if you read it before but not obligatory), more particularly in the slum of a merchant town. A deadly mission is given to amazing crippled Kaz in exchange for a huge amount of money. He brings with him a team of outcasts fellow to fulfill this task.

“You’ve seen what this drug can do. I assure you it is just the beginning. If jurda parem is unleashed on the world, war is inevitable. Our trade lines will be destroyed, and our markets will collapse. Kerch will not survive it. Our hopes rest with you, Mister Brekker. If you fail, all the world will suffer for it.”
“Oh, it’s worse than that, Van Eck. If I fail, I don’t get paid.”

I loved deeply all the characters, but Kaz Brekker was definitely one of my favorites. He is the leader of the little group of thieves and we can recognize him thanks to his dark leather gloves that he never forgets to wear as well as a cane which helps him carry his crippled leg. I read in some review that some of the readers compare him to the Darkling, I only partly agrees, he has some very dark sides that can be used as a comparison but he is way better deep inside. To me, he had some parts which made me think of Jack Sparrow: smart mouth never out of tricks to get out of tricky situations

One of the other main characters is Inej Ghafa, the Wraith. To me she full of hope despite the fact that she is one of those who had the worst history. She was abducted from her parent’s boat and was sold as a slave in the house of pleasure. She was bought by Kaz and became part of the shadow in its army.

Then there is Nina Zenik who is also one of my favorites. She has such a smart mouth. She is a Grisha who can at first seem selfish but ends up to be one of the most concerned about her friends. I just love her. She is so smart, powerful and nice.

The last three on the crew are Jesper Fahey who is a gambler and whom I liked but not loved and Wylan Van Eck who was kind of the same as Jasper. They were the typical side character bringing in some comic relief.

Last but not least, there is Matthias Helvar who I hated at first and he ended up being part of my favorites. I loved his shadows and his goodness. He was the one who was the least reliable, I always feared that he was going to betray the group, despite the fact that he was supposed to be the moral guy.

3 thoughts on “{ Review } Six of Crows by Leigh Bardugo”