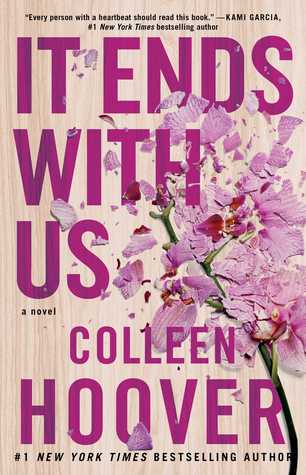 “Fifteen seconds. That’s all it takes to completely change everything about a person. Fifteen seconds that we’ll never get back.”

~Okay, let’s get started, I know that if I don’t review this book now, I never will.~

First, you need to know that before this book I was in a HUGE reading slump and that I read this book in one night (it’s been several years that I haven’t done that, quit sleeping to read) so I apology in advance for the spoilers and the mumbling, because this book takes writing to a whole new level

>> Do you feel it? The excruciating pain of wanting to make the wrong choice? Was any of the choice good after all?<<

This book is my second Colleen Hoover, and yet I can feel something different about it. I can feel that this story is written with guts and not only mind. I knew from the very first pages that this story HAS to mean something to CoHo. This is only at the end when I’m agonizing on the cool hard ground that I realize just how much of her lie in this book. Her final note was probably what broke me the most. I’ve witnessed domestic violence in my life, but I’ve never actually lived it on a daily basis. I never truly comprehend it. Until now.

“It stops here. With me and you. It ends with us.”

I think that you should read this book without any clue of what it is about, but if you still want some clue, I would tell you that this book is about love, about what a person can or cannot endure out of love and what she/he chooses (or doesn’t choose, that’s the point) to let herself/himself endure. This book is about abuse and domestic violence and the ripples effect it has on one’s life but not only. And it also is about how I realized that even if I claim to be an open-minded person, I was judgmental toward them. I always thought “why is she not leaving him?” “if she staying that means that she is putting it on herself” “we are strong, we can face them, press charge, take our suitcase and leave without a look back”. This book proved me wrong. This book shattered me.

So yes, this book left me depressed, thinking about this story pains me in my soul but it also helped me discover a new part of myself, it allowed my heart to more understanding than it used to be toward others and also toward myself.

Spoilers below this point

Choice. To me, this book, as life in general, is all about choices. How do I make the right decision? Is there a “good” option or will they both be the end of me? I know that whatever the choice is, I will be hurt, I will suffer, but which one is the best of them in the long run?

Those are the question that the main character, Lily, has been asking herself (and I asked them to me as well). And I felt so implicated in her story and her choice(s), and even after this book I still want her to make what would have probably been the worst choice in the long run. She loved Ryle. I loved Ryle as well. I loved them both together. And I wanted love to be enough. I needed love to be enough. And even after this book, I still want to believe that love can be enough.

I wanted him to have one more chance. I would have given him one more chance (and how many after that?) I was in the vicious circle of abuse and I was making the choice I promised myself I would never do. I was enduring two failures at the same time: his and mine. He didn’t keep his words, and I didn’t keep mine. NAKED TRUTH? No matter how I always claimed to be the one who would leave, I wanted to stay for him.

“Just because someone hurts you doesn’t mean you can simply stop loving them. It’s not a person’s actions that hurt the most. It’s the love. If there was no love attached to the action, the pain would be a little easier to bear.”

Lily and Ryle’s relationship was so true, so well written, so layered. The same way the book is. This book is not black nor white, the characters are not good nor bad. This is what makes this book so powerful, it was actual reality. I related to it. I will never forget the pain I feel while thinking about Ryle, I still can visualize the pain in his eyes.

I liked Atlas very much, I felt him like an old tree, here even when he is not, reliable, home, and I liked that at the end he was part of Lily’s equation. Atlas is part of the reason why I admired Lily so much, he is a part of her, of her past and of who she is and why she became the way she is. She is BRAVE and BOLD, she is a role-model for any women struggling and she is now part of my favourite heroines ever.

“In the future . . . if by some miracle you ever find yourself in the position to fall in love again . . . fall in love with me.”

One thought on “{ Review } It Ends with Us by Colleen Hoover”