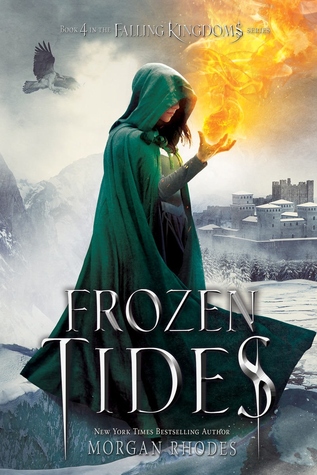 Dear Lord!
This book just made it to my all-time favorites. Strong spoilers below

During the first three books, there were only two reasons why I kept reading this series, the main and first one was Magnus, and the second one was Magneo. They were the only chapters I was eager to read, the only ones that I couldn’t stop if I was in it (and yes, even if it meant having to walk back to my place WHILE reading, hands freezing and bumping into strangers because I couldn’t pay attention to anything else but those chapters)

“She was his princess. No. She was his goddess. With her golden skin and golden hair. She was his light. His life. His everything.
He loved her more than anything else in this world.”

And then, Frozen Tides arrived, and it made my interest in the other characters grow. Yes, I’m not fooling myself, I know that I’m still here for the same reasons persons, but the side stories were far more interesting. What I particularly like in this series is that the plot and characters don’t drastically change between one book and another. Each story is a fluid continuity to the previous one. New characters and plots are introduced smoothly. Kraeshia, for instance, is gradually brought up. I loved that we finally got to see that new land as well as the way the Emperor decided to govern and rule his country. It also made me realize the problems I saw in the first books were nothing compared to the bigger scale. It helps to put things into perspective here. I especially liked that it took them two generations to fully organize their rebellion. It really shows the parallel to Jonas’ eagerness and that patience can be a strength.

The story starts where Gathering Darkness wrapped it off. Cleo and Magnus fled in Limeros, as, after opposing King Gaius, they are guilty of treason. Meanwhile, Jonas and Lucia are still in pursuit to find the dangerous Kindreds. In this book, Morgan Rhodes’ added two POV to the usual four: Felix and Amara. We met those two characters in the previous book, and they were both really mysterious, so I was happy to have their points of view here. I liked that Felix was both cocky and a badass assassin. He really grew on me and I started to fear for his life. Amara is the ultimate villain, the female version of the King of Blood. She is so driven by the power that she only sees through her selfish motives to be known and feared. She also seeks the Kindred, so that it would allow her to achieve her desire to dominate the world.

In Frozen Tides, everyone has something to fight for. Lust for power is the main credo of this book, characters want power for one reason or another: to seek revenge, to acquire freedom, to protect love, to find redemption, to belong. Most are willing to destroy everything and everyone in their wake to obtain it. Families were broken; new improbable alliances were made; loved ones were lost; all in this pursuit of power. And its unlimited power lies within the elemental crystals that are supposed to give infinite magic to the one that owns them.

I’m definitely in love with Magnus, it pained me to witness his dark struggles, to feel his fear of being denied, his need to belong and be loved, his struggles with trust. The masks he is wearing are tiring him but it is his ultimate protection against rejection. So he kept hiding his feelings especially to the principal interested (more or less successfully) and tried to conceal his good heart and soul while planning how to defeat his sadistic father and protect Cleo. I loved that we got to see his potential as a leader but I wanted more political situations where he could have taken strong and meaningful decisions. It could have been way easier on him if he was just like his father, and he tried to impose this thought on his mind but how it fails. Clearly, I could manage a book of only Magneo.

“Send me pain so I know I’m still alive. Help me continue to suffer. For if my father has already killed her, then I need to live so I can avenge her”

Cleo has grown so much through the books. I like how she became a master of manipulation. She is brave and ingenious and keeps her chin up no matter the situation she is in. She never allowed Magnus or the King to minimize her, to lower her as a person. I loved how gradually she fell for Magnus and how she tried not to, especially with their mutual background. She slowly realized how caring and good he was, no matter what he pretended.

Really, they could have made me die several times of heart attack with their sexual tension. They are just so afraid of rejection that they NEED to push the other one away before being pushed away themselves. Their cat and mouse game made me feel desperate and I just wanted to pull my hair off. But geez, it finally happened! This scene was just what I needed and beyond. My poor tortured soul, when he kneeled and made his declaration it was so raw, so powerful, my heart skipped a beat.

“I love you, Cleo,” he said, the words finally coming to him, with no effort at all because of how true they were. “I love you so much it hurts.”