“Love is a path lined with roses,” I say bitterly. “But it leads to a cliff’s edge, and all who follow it tumble to their doom.”

«Which Character from The Forbidden Wish are you?» take the quiz right here! I got Zahra, my favourite character in this book!! Tell me who you got in the comment! 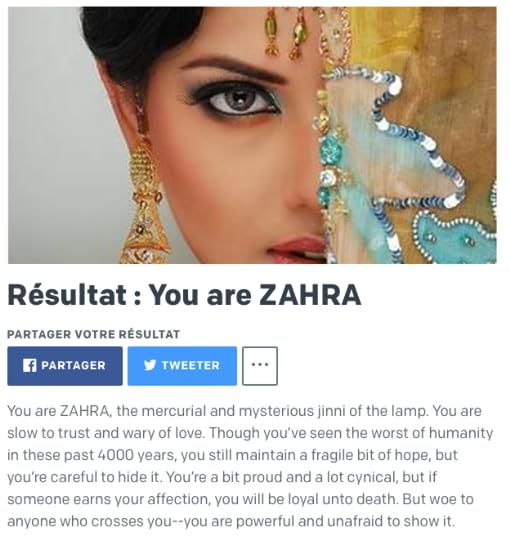 This book was close to perfection!

I haven’t planned to read this book yet. I didn’t even hear about it before its release. But my in a couple weeks, my feed has been filled by positive reviews and most of my friends seemed to have read it, and loved it. I made the choice to not read spoilery reviews of it before starting my review, I basically knew nothing about it except that it was an Aladdin retelling. As I am a huge Disney fan, as Agrabah always mesmerized me, as Jasmine was my favourite princess when I was younger and also because I wanted to marry Aladdin when I was 11 years old, it was enough to convince me. But I was so far from the truth!

Yes the boy we follow is named Aladdin, and he finds a lamp which holds a jinni in a cavern full of gem and there is a princess and it takes place in the same region. But this is it. The main character is THE JINNI, and that jinni is a GIRL! I have to admit I didn’t see that coming! It was a great surprise and a wonderful idea to make this book what it is. Also, jinnis are cunning and wicked and always want to trick human with twisting their wishes so that they will work against them at the end.

~Can’t kill anybody ~ Can’t make anybody fall in love ~ Can’t bring people back from the dead (well at least this one stays, it’s not forbidden but not possible for a jinni to do) ~

However, in the book, Aladdin wants to wish to kill someone and the jinni says he can wish it, and later on, the jinni proposes Aladdin to wish that the princess falls in love with him. I’m twisted but I loved that, it made this book darker, more grown-up.

Zahra is a shape-shifting and powerful jinni. She is one of the most powerful ones, able to control all four elements. She has chosen to take the physical aspect of her long lost friend, the previous queen, her Habiba she is known to have betrayed. This is her who started the 400 years’ war against Jinn.

I truly loved Zahra, she was down to earth, decided to learn from her previous mistakes, decided to achieve her goal of freedom, no matter what, but she sometimes feel regrets and she questioned herself. She has a lot of fears and I can totally relate to her. It was a treat to read about her and through her. She also was compassionate and friendly toward girls and strong-headed toward men with bad intention. No misplaced jealousy, no girl hate, a female main character that has other interest than love: thumbs up!

“Turning to face him, I lean in and whisper, “Wish for her love, and I will deliver it to you.”
He smiles grimly. “Then it wouldn’t be love.”
“And what do you know of love?”
“That it must be a choice.”
“Oh, my naïve thief.” I pause briefly to meet his gaze. “Love is rarely a choice.”

Aladdin is very dark in this book, revengeful and a real womanizer. He wants to avenge his parent’s death, killed in front of him because they were part of the rebellion against the throne. I think that deep down he wants to have some reconnaissance and be considered as they were, and not only being a purposeless thief. Even if he doesn’t admit it, he is also loyal

Caspida, the princess, heir to the throne was also a great character, she had the same qualities that Zahra had, she taught us the great lesson about woman independence and benevolence

It was a great and unexpected love interest we had here, it was refreshing to see doubts that were actually justified and not only with the purpose to make the reader longing. It took me by surprise and was gradually building in front of me. You heard me right: no instalove here, no mice and cat play. True hesitations and great relationship building. And I know it is rare but the world-building lived up to the relationship building! Jessica didn’t neglect one toward the other. She did a wonderful work taking time describing the Jinn system as well as the political aspect of the human world. I lost the notion of time while reading it, I felt feverish and transported somewhere else, I WAS in the book.

“There is only one thing more numerous than the stars,” I say,
looking up to the heavens. “And that is the darkness that holds them.”

The ending was a bit lower than the rest of the book, a little bit rushed, few pages more to add details wouldn’t have bothered me, some part made me unhappy, but still, it was good enough. An epic fight between the two most powerful jinnis, the Forbidden Wish, and we also get to see Zahra real physical appearance (even though I would have loved that she kept the shape-shifting power, I see that I’m not the only one ^^)