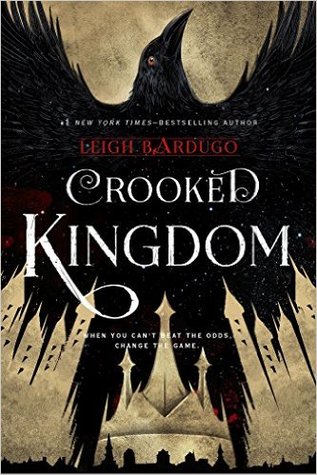 “Why do you guys say that, anyway? No mourners, no funerals? Why not just say good luck or be safe?”
“We like to keep our expectations low.”

My Rating: 4 June 30: Most Anticipated Releases for the Second Half of 2020

This is it, I’m reviewing this. I feel like something exploded inside me. I have a hole and it hurts and it feels raw. This will be more of a booktalk than a review because this is the only thing my brain can process right now. So this will be full of strong spoilers, gifs and quotations, sorry but I need to make this therapeutic for me.

First things first, I had to read most of this book twice before being able to put words on my feelings, and I think that was mostly because this book is nothing like the first one. It wasn’t what I expected. It wasn’t either what I really wanted. It was still good but way below the first one. I had a huge issue with the rhythm which was at the same time too slow-paced and too fast-paced (yes, that’s a thing). I was always waiting for THE BIG SHAM, and it never truly happened. It ended up to be a very fast succession of “middle shams” that happened every other chapter and that never let place for what was supposed to be the reason this book was written. Yes, there was a “major” part of the whole plan, but it was way too late and once again way too fast-paced. Mostly, I can say that this book was basically chaos.

And now, I’m having a déjà-vu feeling when I think about my post-Ruin and Rising review, to be honest. Bittersweetness, emptiness, anger, frustration. I have so many questions. This book left behind so many unfinished tasks.

“Don’t worry, Da. People point guns at each other all the time in Ketterdam. It’s basically a handshake.”

I’m rating this book with four-ish stars, it would have been closer to three if it weren’t for the comeback of some characters from the Grisha Trilogy.

Leigh Bardugo did it again; she introduced to me characters that were built for greatness and then shattered them and left them to dust. In this book, nothing was the same. Worst: no one was the same. Cards have been redistributed and it impacted a lot on my favourite characters’ ranking. This review will be presented by “partners” as it seems to be the permanent feature of this book.

Nina is the only constant in greatness and badassness in this duologie. She was one of my two favourite characters in book Six of Crows and she is still one of my two favourite characters in Crooked Kingdom. My number one from cover to cover. She evolved so much, she was a queen. She had her battle and struggles with her weaknesses for most of the first part of the book but she finally overcame her fears. I loved how she manages to wean off jurda parem, how she dealt with her loss of power and then the discovery of her new ones, the name The Order of the Living and the Dead has never been so fit.

“She was the Queen of Mourning, and in its depths, she would never drown.”

She and Matthias are such a wonderful couple. They were so caring and full of tenderness, I have no word to describe what I felt when I read about them, only moments of my life that make me feel the same. They were the smell of hot croissant in the morning, the feeling you have when you’re in bed and listening to the rain pounding against the window, they were home.

Matthias has fought his demons in Six of Crows and he defeated them. He was a strong asset in Crooked Kingdom because he had this peace of mind with who he is and with what he’s doing and why he’s doing it. He blossomed and it was a real discovery. This is why I’m so angry about this book. I hated his death. I can’t cope with it. I hated the resignation around it, and how he was treated as an expendable when he was a character that has evolved so much and yet so gradually. He was at peace and he was killed by this pseudo-younger-self. It doesn’t make any sense, it doesn’t send any message. I feel cheated. It’s not the same wound as it was for the Darkling, there I was heartbroken, but here, I’m speaking about a genuine and deep wound. One that will not leave me anytime soon.

“She would fight for him, but she could not heal him. She would not waste her life trying.”
“In the next life then,” she whispered. “Go.” She watched his eyes close once more.
“Farvell ,” she said in Fjerdan. “May Djel watch over you until I can once more.”

I can’t explain the feeling I have.
And yet I can.
I feel like in Titanic.
I feel the same as when Rose leaves Jack to drawn. And yet she goes on with her life. And you know, good for her, she’d never forgotten him and still had a husband and everything. But I feel still obsessively mad that her love for Jack wasn’t stronger than his death. It’s selfish but I wished she’d have spent her life in misery only waiting to meet him back. I know Titanic’s ending is free of interpretation but I’m so strongly convinced that she dies and that her spirit goes back to the Titanic to marry Jack.

I wanted to at least witness that for Nina and Matthias. Hence the babbling.

Wylan and Jesper were the running gags on SoC, they didn’t touch me very much and I didn’t feel connected to them back then. They were just meh.
Hell those two! I loved having Wylan POV (at last!) He was so perfectly sweet. A little kid who’s building in confidence, I really loved his background story.

““Wylan Van Eck, you lied to Kaz Brekker .” Jesper clutched a hand to his chest. “And you got away with it! Do you give lessons?””

And Jesper was so layered and he had his own demons to fight, he was darker, in this book we learned a lot about his background and I think his struggles were one of the most interesting along with Nina’s. I also loved Colm, his father, it was a great man and a role model for parenting even though his son ended up not being on the right path.

“Matthias joined them at the table. “The Shu woman we faced was stronger than me, Jesper, and Wylan put together.”
“You heard right,” said Jesper. “Stronger than Wylan.”
“I did my part,” objected Wylan.”

I LOVED W&J as a couple. It was so natural. I really want to applaud Leigh Bardugo for what she did with those two. There were no labels. No coming-out or else. Nothing about being gay, or bisexual or straight, or “this is a one-time thing”, nothing about shame or pride. It’s just about two souls being attracted toward each other and nothing is worth being commented. That was perfect. The first time I witness this in a book and that just made me melt.

Now let’s speak about THE disappointment of this book: Kaz. I’m so sorry, but I mean it. He was on my top two in the previous book and now I almost feel resentment when I think about him. He was beyond recognition. He was too self-insured, thinking he is invincible. He never failed, always finding his way around a situation. No one is like that in real life and neither in a realistic book. This was really the thing that made me lower the rating of CK. It became boring because, in the end, he was the only one not successfully defeating his demons. He didn’t show his weaknesses, he didn’t make amends. I think at one point that Leigh was going to make him die. And it would have made more sense; he was the most damaged. Moreover, his plans weren’t as good nor as detailed as before, mostly, they were kind of blurry.

“Nina rolled her eyes. “Good thing this is all about getting our money and not about saving Inej. Definitely not about that.”
“If you don’t care about money, Nina dear, call it by its other names.”
“Kruge? Scrub? Kaz’s one true love?”
“Freedom, security, retribution.”

Inej showed more wisdom in this book, but her way to be all over Kaz bored me to death. I didn’t feel the alchemy of their couple. I would have made more sense to have them both becoming really close friends. I mean, not everyone is obliged to have a “soulmate” in this team of 6. They could have had other love interests, or better, none at all. They could have “only” been to each other the friends that genuinely care and wanted to help to get the other out of his struggles.

“Do you know the Suli have no words to say ‘I’m sorry’?”
“What do you say when you step on someone’s foot?”
“I don’t step on people’s feet.”
“You know what I mean.”
“We say nothing. We know the slight was not deliberate. We live in tight quarters, traveling together. There’s no time to constantly be apologizing for existing. But when someone does wrong, when we make mistakes, we don’t say we’re sorry. We promise to make amends.”
“I will.”
“Mati en sheva yelu. This action will have no echo. It means we won’t repeat the same mistakes, that we won’t continue to do harm.””

Still, I love how Leigh always manages to keep part of the plot from us without making me frustrated. I always felt like I had all the cards, but then I realized that one of my babies still had one hidden in the sleeve. She really is a queen in that field.

Now can we speak about the highlight of this book, AKA Nikolai? I mean, my heart stopped when I read the word “Sturmhond”

“Why does your weak king send a filthy pirate to do his bidding?” sneered the Fjerdan ambassador, his words echoing across the cathedral.
“Privateer,” corrected Sturmhond. “I suppose he thought my good looks would give me the advantage. Not a concern where you’re from, I take it?”

And Genya? God, I always loved her!

However, the ending is the part that frustrated me the most and that got me so very mad. I was not ready to read about such normality. So many questions. We don’t get the “everything is going to be all right” feeling. I need that feeling when I end a book or a series, otherwise, it means that this is not over. Now I need a book on Nina and Nikolai. Yes please, that would be perfect. And not necessarily with them in a relationship but they could make wonder together *wink to you Leigh*

“Crows remember human faces. They remember the people who feed them, who are kind to them. And the people who wrong them too. They don’t forget. They tell each other who to look after and who to watch out for.”