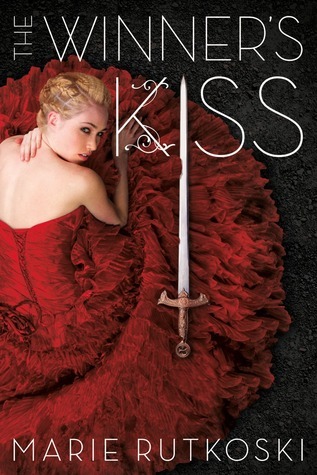 “Kestrel thought that maybe she had been wrong, and Risha had been wrong, about forgiveness, that it was neither mud nor stone, but resembled more the drifting white spores. They came loose from the trees when they were ready. Soft to the touch, but made to be let go, so that they could find a place to plant and grow.”

What Marie Rutkoski (should) feel after having written this piece of heaven:

I’m hurt, and I don’t even know when if my heart will again beat normally. This book left me speechless and soulless, numb to my surroundings. With that ending, Marie Rutkoski made The Winner’s Trilogy one of my favorite book series of all time. Every word, every emotion, every touch were so just and where they were meant to be. It touched my deeper self and I’m pretty sure it changed me. I’m not the kind of person who considers romance as the most important part of a book, it can easily seem fake or too much. I hate instalove and love triangles and I often preferred any other male character that isn’t the one the heroine chooses. In this series, you have none of this.

“The reason you enjoy my company is because I look like how you feel.”

The author didn’t rush the relationship building, and this is what makes those books so special. In The Winner’s Curse, we barely see the beginning of Kestrel’s feelings, she is looking for herself, questioning what is inside of her. This is also why I found this book a little bit slow, but it was needed because then Marie took her time to set up the world and each characters’ personality. It was probably what made the rest of this series so great. Now I can say that this length was needed. The Winner’s Crime, had such a different energy. It grown in maturity the action started sooner, the dilemmas were more felt because the work was already made for the background. I cherished this book with all my heart. But then come out The Winner’s Kiss and my dear, that was another story. I feel like I have to down the rating of some other books because my five stars here cannot be compared.

“She stepped into his arms. He held the rope of her braid gently. He was drowning. He was far below the surface. He’d forgotten how to breathe. Then his lungs opened and his mind grew quiet and clear. “Come back to me,” he murmured. “I will”.”

The Winner’s Kiss made me feel like I wasn’t reading a Young Adult book anymore. It was more violent, it hurt me in other ways that romantically, but also much more mature. It hurt my soul as well as my heart. Both Kestrel and Arin understand the stake here and know what has to be done for the greater good. They didn’t try to forbid the other from taking risks, because they knew the uselessness of it, they knew better. I loved that in them, but it also gave my heart many heart attacks. They learned to know each other in different settings than before. On the opposite to book 1, we didn’t have any minute to take our breath, it was so action-packed, the pace was well balanced, enough to make me crave for more and more until the last page.

““Maybe,” he said, “we could try being honest with each other” she wondered what was in her expression that hope would grow in his. She wondered what he saw. “Arin,” she said, “I like the dagger.” He smiled.

Kestrel Trajan is a strong and smart MC, she is a born tactician, daughter of General Trajan, who led the war against the Herrani people. She always tries to take all parameters into account before acting. She is not one of those brainless characters that were made to be kickass but mainly only run into danger just to be judged brave. I imagine her so soft and gentle and patient as well. She is wise and her strengths lie not with her physical condition but with her cunning mind. The fact that in a first-place she couldn’t remember her past was a good point to me because 1. I have a terrible memory and I didn’t have to struggle to remember parts of it and 2. it gave the book a new breath, we already know that Arin and Kestrel had mutual love, but it is even more frustrating that even reunited, doubt comes in between.

“A light hand touched her arm. “I don’t know you well,” Risha’s voice was low. “But I know what Verex has told me about you, and what I see for myself. You don’t need to be gifted with a blade. You are your own best weapon.”

Half of the book is through Arin’s eyes, this is the first time we see so much of him, his feelings, his fears. I can now describe him in ways I couldn’t even think about before. First of all, he is a very insecure character, especially when it concerns his physical appearance. It really broke my heart how he doesn’t believe Kestrel at first when she tells him he is beautiful. The scars he bears are not only visible, some of them are also deep down, branded on his soul. He holds a grudge against the General, in some parts he is even bloodthirsty relying on his God of Death to lead him the way to avenge long lost his family.

“Do you want him? Arin’s god whispered. Do you want to crush him between your hands?”

He also has a very gentle and romantic side in this book, he is patient and respectful when it comes to Kestrel, he gives her time to remember even though I only want to finally live his love. Kestrel’s condition made him vulnerable but it also gave him strength coming from somewhere else.

“Will you come with me?” Ah Kestrel, that’s something you never need to ask.”

I have to give one part to one other character that was extremely important to me and that was introduced in this last installment: Roshar. Brother to the Queen and Risha’s brother. I distrusted him a lot in the beginning. He always seemed like he was plotting. But he happened to be a hilarious character, smart and who hides behind his jokes to hide his shame over his physical appearance.

“Sometimes Roshar plays the selfish prince so that no one expects anything better of him. It’s not who he is.”

I have to share the following quote as well, it made me laugh out loud in the train in front of everyone, and if I were able to go back in time, I would do the same, it was totally worth it

“Kestrel, who wasn’t entirely sure she wanted to hear Arin’s answer, said, “Why do you want rope?” “Let Arin surprise us,” Roshar said. “That’s how we do things. He comes up with something brilliant and I take the credit.””

I loved to see all those characters vulnerable, flawed and determined, all of them had that in common, Marie Rutkoski wasn’t afraid that we might not like them, or if she was I have to tell her: Good job, their shades of gray made my heart melt even faster.

8 thoughts on “{ Review } The Winner’s Kiss by Marie Rutkoski”