“Better never means better for everyone, he says. It always means worse, for some.”

Book 2 of My November/December Project

The Book:
I’m so sad to say that this book didn’t win me over. At all. I was so bored that I almost gave up more than I can count. Honestly, I heard so many great things about this book that I really thought I was going to like it. Moreover, Emma Watson, who is my personal role model, hid copies of this book in Paris last June that she personalized and signed (you can only guess how hard I tried to find one of those, without success), and that was one of the top reasons to read this book for me.

This book takes place in the United States in a really close future where human fertility rate collapsed, a totalitarian Christian group overthrew the current government creating a society where dissidents, gay are hung. A society where men hold all the power and where women are subjugated, indeed they can’t own anything under their name (money or property), they are not allowed to read and it even became forbidden for them to work. Women are categorized according to their use: the Wives (who wear blue) are spouses to the leader, the Marthas (in grey) take cares of their household, and the Handmaids (in red) are stripped from their own name and are propriety only used to reproduce.

Each Handmaid is trained by Aunts (in brown) and then she is assigned to one of those elite families until bringing into the world one child for them. Every month, on the most fertile day, they do the Ceremony ritual when the Handmaid’s is being laid down, hold down by the wife and raped by the husband. Every month. Without exception. Until she finally bears a child. Those who don’t collaborate are either killed or send to the colonies (which is basically a forced-labour camp) and some of them have to become prostitutes to survive.

Unfortunately, this reading disappointed me to no end. The world-building was weak because if we take into account that it’s supposed to be a very close future, I can’t see how it seems possible that things would change so drastically overnight. It was too radical and seemed already well implanted into the mentalities. We are told about some sort of resistance but I don’t feel like it’s credible nor well organized at all. The plot itself wasn’t that entertaining either, it’s a series of descriptions and flashbacks, and the writing style was awful (and don’t get me started on the punctuation).

If it’s a story I’m telling, then I have control over the ending. Then there will be an ending, to the story, and real life will come after it. I can pick up where I left off.

It isn’t a story I’m telling.

I had no affection whatsoever toward the narrator/main character, her voice was bland and her story didn’t move me as it should have. And a story that strong needed a stronger voice to work out. Every subject was only superficial, and it was hard to picture such a different world with no in-depth description and explanations. Because to my opinion what lacked the most were explanations, most of what’s and why’s that I never got any enlightenment, and that resulted in numerous plot holes in the storyline.

The TV show was better than the book to my opinion; I was especially in awe in front of cinematography, the scenes were so aesthetical it was pleasant to my eyes. The story itself had fewer holes and the fact of actually seeing things gave me some of what the book lacked. I’m not a fan of the casting choice (except for Moira’s and Serena’s characters) but I actually felt something while watching it and it was a welcomed change. 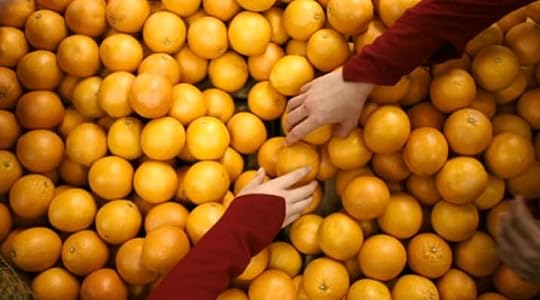 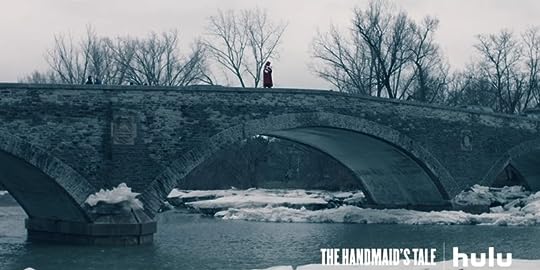 And on that note, I’m in awe with Yvonne Strahovski’s acting, she put so much depth and layers to Serena Joy’s character, I loved her. If I were to rate the TV Show, it would be a solid 4 out of 5 stars.

6 thoughts on “{ Review } The Handmaid’s Tale by Margaret Atwood”