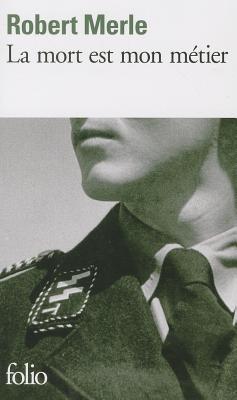 Read in French, but because most of you are English speakers here, I will review it in English and translate the quotes.

English title if you are interested: Death Is My Trade

A dark dark book.
Germany, the first half of the 20th century. WW1 just finished, the Germans are angry and ashamed to have lost this war, and the country is poorer than ever. The people resent countries from the Alliance and most believe that soon they will get revenge by being obedient and faithful to their country. In this book, we follow Rudolf Lang, from childhood until the end of his days. Raised in a very severe and strict way by his father who is a former officer, he finally gets into the army at the age of 16.

“If a plea bites you, don’t you kill them all?”

He gets through horrible things for his age, and at the beginning of the 1940’s he is recruited to be with the S.S.
He becomes the leader of Auschwitz’s extermination camp and he is the one who put the finishing touches to it, making it more efficient.
The worst part is that he is so obedient that not even once he thinks how immoral what he is doing is. He refuses to contest his leader because it is not what germans do.

“At one point, the prosecutor shouted: “you killed 3,5 million people!” I asked to speak and said “I beg your pardon, I only killed 2,5 million.” Whispers raised in the audience, and the prosecutor yelled that I should be ashamed of my cynicism. I have done nothing but to correct him on an erroneous data.”

The only part that bothered me was that some sentences were written in german, and I always had to move back and forth in my book to seek for the translation

I think that the hardest part was to hate Rudolf, at least like I should have.
I think that I’m not capable to make a relevant review of this book.
I think that you have to read it to fully understand how dark and twisted and obedient Rudolf was.